"Be thankful for what you have; you'll end up having more. If you concentrate on what you don't have, you will never, ever have enough"
— Oprah Winfrey

"As we express our gratitude, we must never forget that the highest appreciation is not to utter words, but to live by them."
— John F. Kennedy

Gerald Ford, 38th president of the United States, in 1913

Apart from his teachers, Ayush drives his strength and inspiration from his parents who have been a pillar of support to him.
Both his parents are bonafide professionals working in prolific fields, his mother works as a director of an IT firm and his father is a scientist.
We talked to him about how his parents and their professional background has been helpful in shaping his choices.
Read ahead to know what he had to say about his relationship with his parents.

Read More
✓ Ayush told us that since both his parents are IT professionals, they know how to keep him and his sister engaged constructively on the digital platforms.

✓ Their knowledge and experience with their work come in handy whenever he feels that he is getting stuck.

✓ They understand the nature of his work and completely realise how often he will have to be consumed by his work and help him with sorting his priorities.

✓ Not just him, his 12-year-old sister, is also a prodigy in-making Ananya who is getting skilled in technology including Canva, Minecraft, Python, Mobile App development. She is also a self-published author of ‘Save our Planet’.

✓ Being a tech savvy kid he decided to spread his knowledge and runs “How to” tutorials on his youtube channel about using technology.

Here is Ayush teaching “How to use Google Suit?”

PIN IT! Did you know?
The national animal of Scotland is a unicorn. Tough it's a fabled creature, it was chosen by the people of Scotland because it represented Dominance and Chivalry
NOW GET SMARTER WHILE YOU SCROLL.
Powered by

Human beings communicate in various ways. These ways are called ‘gestures’. We have a long list of body gestures that help us convey how we feel. Smile is one such gesture we have. Smiles vary from being real to fake. But it can express a lot more. Read further to discover what are the different kinds of smiles…
Read More

This is the kind of smile that is reactionary. For instance, when your friend looks at you and smiles, your brain sends you signals and dopamine is released. Dopamine is a chemical released in our body, when we feel happy. So, when you receive a positive vibe, you automatically feel rewarded and hence, as a reaction you break into a reward smile.

It involves the upward pull of lips, where the teeth remain hidden. It is a gentle nature of smile, perceived as a gesture of compassion to communicate trustworthiness. This smile acts as a social connector. For instance, when you are unable to do something, and someone, say a classmate, comes up to help you then the smile you will receive from them is an affiliation smile.

It is a kind of asymmetrical smile, where one side of the face is pulled up and the other side is pulled down. It is generally used to show superiority or dominance. For instance, when you defeat your elder brother in a computer game, the way you smile at him is a dominance smile.

A smile evoked out of an embarrassed situation accompanied by the downward tilting of the head is, embarrassed smile. It is very common for all of us. We use it when we mistakenly step on the freshly wiped floor and make it dirty again.

It is the smile of genuine happiness. It involves a lot of our organs like lips, cheeks, and eyes. Duchenne Smile denotes the happy state of mind. For instance, when we look at our loved ones (or in my case, I look at Pizza) we break into a Duchenne smile.

Did this article make you smile? Let me know.

What happened in the French Revolution?

Over the years, there have been several theories that have attempted to explain the origin of life. Let’s take a very brief look at some of them.

2) Theory of panspermia - The theory of panspermia hypothesizes outer space as the origin of life. Living beings were brought to planet earth by comets, asteroids, or by aliens(!!!) in the form of spores. This theory remains a favourite amongst few astrophysicists, astrobiologists, and evolutionary biologists.

3) Theory of spontaneous generation - This model states that the origin of life happened spontaneously from non-living organisms. Proven false experimentally by Louis Pasteur, nobody believes this theory anymore.

4) Theory of chemical evolution - Put forth by Oparin and Haldabe, chemical evolution of life is probably the most scientific hypothesis of the origin of life till date. It states that the early atmospheric conditions on earth were radical and allowed inorganic chemical molecules to aggregate together to form semi-living structures which later evolved into living microorganisms. This theory has achieved the most backing from the scientific community.

Use: The hirsute teenager was warned that he would be expelled from school if he did not take a haircut and pay attention to his grooming.

PIN IT! Did you know?
Interesting bird fact: a Puffin parent will carry around 10 fishes in their beak to feed their young ones. The younger Puffins are called “Pufflings”.
ALL YOU NEED TO KNOW, WHEREVER YOU ARE.
Powered by

Arctic Heat Wave, Wildfires – a Global Problem.
Dry conditions and a record-setting heatwave in the Arctic have led to huge wildfires across the region. The wildfires are releasing massive amounts of pollution, making further warming and more fires likely.

Robot Lab Assistant Runs Its Own Experiments
Scientists at the University of Liverpool have developed a robot that can run experiments on its own. The robot works tirelessly, stopping only long enough to recharge its batteries. Recently, the robot finished nearly 700 experiments in eight days. 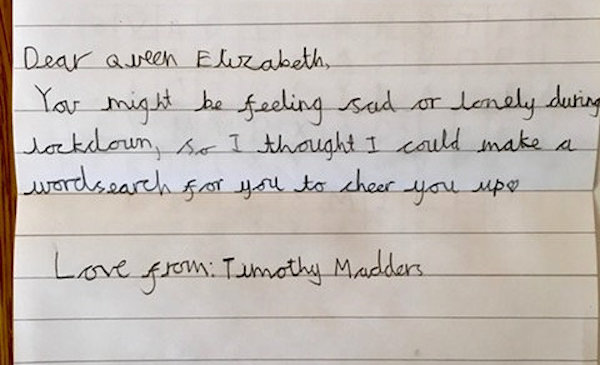 An adorable seven-year-old boy created a word-search puzzle and sent it to the Queen to keep her entertained during lockdown—and was delighted to receive a letter back from royal staff.


The roller-ball device of a computer known as the Mouse was invented by a British scientist in 1946. The speed of a computer mouse is measured in ‘Mickeys’.
NOW GET SMARTER WHILE YOU SCROLL.
Powered by


Glimpses of My Life in CORONA times


In my life I never thought,
That anything ever could make us stop.
Man being a social animal I felt,
He is always free to move, as what his heart felt.

But then came 2020 in all our lives,
Which brought with it CORONA vibes.
It curtailed all inside our home ,
Giving us a feel of being alone.
My school was closed, my park was locked,
My Mom and Dad were too, stuck at home.

That makes me think a lot and lot,
It is that nature is trying to talk.
It want us all to remember what we lost,
And gives us time to acquire that back at a cost.

The cost being to love our mother nature,
And keep aside human's selfish features.
Let us all come together,
And throw away this CORONA matter.

While sitting at home safely,
Let's promise to be nature friendly.