"If we did all the things we are capable of doing, we would literally astound ourselves."
— Thomas Edison

Seafarers are on the frontline of the COVID-19 pandemic, playing an essential role in maintaining the flow of vital goods, such as food, medicines and medical supplies. However, the crisis has led to difficult working conditions for seafarers, including uncertainties and difficulties about port access, re-supply, crew changeovers and repatriation.

✔ The infamous National Emergency of India was announced today back in 1975!
According to the Indian Constitution, an emergency may be imposed during 'war, external aggression or armed rebellion in the whole of India or a part of its territory.'
In 1966 Mrs. Indira Gandhi, was elected Prime Minister of India. She took control of both government and Congress, and her re-election in 1971 was found to be the result of election fraud by what is called manipulation of state machinery. The war with Pakistan in 1971, a trembling economy and a public upheavel against misleading politics led Mrs. Gandhi to call up for an Emergency lest her rule should be put to a rest!


1974 - Karisma Kapoor : She is an Indian film actress. One of the most popular Hindi film actresses of the 1990s and early 2000s, she is the recipient of several accolades, including a National Film Award and four Filmfare Awards.

1947: 1st edition of The Diary Of A Young Girl also known as The Diary of Anne Frank got published.

1975: The then President of India Fakhruddin Ali Ahmed officially issued the declaration of Emergency Rule under Article 352 (1) that was withdrawn on 21 March, 1977.


Michael Jackson, a multi-talented musical entertainer who enjoyed a chart-topping career both with the Jackson 5 and as a solo artist. He released one of the best-selling albums in history, 'Thriller,' in 1982, and had other number-one hits on 'Bad' and 'Off the Wall.'

Known as the "King of Pop," Michael Joseph Jackson was a best-selling American singer, songwriter, and dancer. As a child, Jackson became the lead singer of his family's popular Motown group, the Jackson 5. He went on to a solo career of astonishing worldwide success, delivering No. 1 hits from the albums Off the Wall, Thriller, and Bad. Michael Jackson began his music career alongside his fellow brothers and family members in the Jackson Five. His career began in 1964, aged only six.

The group, led by Jackson’s father, worked hard touring many clubs and bars performing their mix of Motown hits. They gained the attention of record labels and in 1968 signed with Motown records. It was the youngest, baby-faced Jackson, that caught the eye of reviewers. Rolling Stone magazine wrote that Michael was a ‘prodigy’ with ‘overwhelming musical gifts’. Michael stood out for his exceptional enthusiasm and soft, infectious musical voice. The group produced four number one hit singles, including “I Want You Back“, ABC and “the Lover You Save.”


Despite achieving his goal to be a music performer, Michael’s childhood was far from happy. He was regularly beaten and threatened by his authoritarian father. This legacy of abuse left Michael scarred throughout his adult life. In his later years, Jackson was dogged by allegations of child molestation. He died in 2009 at age 50 of a drug overdose just before launching a comeback tour.

“Lies run sprints, but the truth runs marathons. The truth will win this marathon in court.”
– Michael Jackson

PIN IT! Did you know?
King of Pop Michael Jackson loved animals so much that he had two pet llamas. Their names were Lola and Lewis.
NOW GET SMARTER WHILE YOU SCROLL.
Powered by

In July 1518, hysteria broke out in the city of Strasbourg when a woman known as Frau Troffea suddenly stepped on the streets, and began to twist, twirl and shake. She kept dancing like that for a week and almost thirty-six more people joined her. People were struck with an uncontrollable urge of dancing and they just could not stop. Within a month, the dancing epidemic gripped around 400 victims. Soon these dancers would collapse from exhaustion or die from heart attacks or strokes. It was such a bizarre phenomenon that the reason behind this mass hysteria was never discovered. However, here are some interesting facts about it.
Read More

Scientists also refer to it as the ‘forgotten plague’. It is because it was an inexplicable disease or a phenomenon, and nobody could tell the reason behind it. It was a contagious disease that people suffered from, for months. It was an unknown spontaneous outbreak of dance that was unconscious and uncontrollable.

2) The Symptoms were Extraordinary

3) It Gradually Spread to Other Countries


The outbreak of the dancing plague started from Aachen, a city in the holy Roman Empire. From there it gradually spread to different parts of Germany and Italy. It infected almost ten thousand people. The authorities were clueless on how to control the outbreak.

4) The Disease was Coped with Music


At first, the authorities tried to control the disease by quarantining and isolating the sufferers from other people. But when that failed, they found a better way of coping with the outbreak. One such way was to play music according to the moves of the sufferers. The method was as bizarre as the outbreak itself.

5) There is no certain Cause of this Outbreak


Even today, no one knows about a certain reason behind this phenomenon. But according to a historian John Waller, a catholic saint St. Vitus had cursed the people of Rome and caused this outbreak. Other medical explanations include an infection spread from ergot poisoning. While some scientists also believe it to be a mass hysteria caused due to a collective mental illness. But, no certain reason has been discovered yet.

I wanted to give you guys an insight about clinical trials in today’s article. However, I got a unique opportunity today that I didn’t want to miss. Did you know that Windows 98 was released on this very date, back in 1998?

Of course you don’t, you weren’t even born yet! Well, neither was I, but I did get to operate on a computer running Windows 98 for quite some time. Most of you have been exposed to the Microsoft operating systems either through Windows XP or Windows 7. Both of them were revolutionary in their own right but so was Windows 98. It made some drastic improvements over its predecessor - Windows 95, which itself was wildly popular and responsible for Microsoft’s domination over the then OS (Operating System) market.

Today I will try to shed some light on why Windows 98, despite initially having a bad rep for merely being Windows 95 with the addition of the Internet Explorer 4.0, was one of the key operating systems in the Windows lineup.

1) The first OS to support DVDs and USB devices.


Imagine plugging in your pen drive with all the important data for the next day’s class project only to have the OS not recognising it. Well, we have Windows 98 to thank for that not happening.Windows 98 was the first operating system to have inbuilt support for reading DVDs and other USB devices and drives.

Windows 98 allowed users to modify the start menu so that they could have their most important programs or files only a click away. This was one of the most appreciated tools that the operating system brought with itself.

Windows updates are fairly common now. Most of them let them happen automatically while others simply update their OS from the Windows Update Centre - which was first introduced in Windows 98. In its predecessor, the user could only initiate updates from the Microsoft Website.

“Oh my god, my PC takes forever to shut down.” Clearly you’ve never had to deal with Windows 95 which took actual ages to shut down. Windows 98 made some drastic improvements with regards to significantly cutting down the shutdown time. Remember, this was during a time when people were more “offline” than “online”.

Here’s a link for you if you want to try out Windows 98 on your browser using nothing but Javascript(yes Spongebob, we have that technology now!).


Pick a pen, a paper and a corner of your home! It’s time for The Writing Olympics!

For the 5 circles of the Olympic Games, for 5 Days from now, we bring you 5 writing prompts every day and you can pick any one to write about.

1) Write about what would it be like if you had an alligator as a pet.
2) Write a story using these 5 words: apple, train, elephant, paper, banjo
3) What do you want be when you grow up and why?
4) Who is your favorite person on the planet? What do you like most about that person?
5) If you could have any secret super power, what would you want it to be and why?

Rules of the Game:

Eligibility: Anyone with a passion for writing. Open to students, teachers, and parents too.

Award: Best Entries get featured in the magazine and on


Wherever it stops, you gotta to do that activity today:


3 Idioms to use in everyday life:


Actions speak louder than words - People's intentions can be judged better by what they do than what they say.

At the drop of a hat - Without any hesitation; instantly.

Back to the drawing board - When an attempt fails and it's time to start all over.

PIN IT! Did you know?
The actor who played the voice of bugs bunny, Mel Blanc was allergic to carrots.
ALL YOU NEED TO KNOW, WHEREVER YOU ARE.
Powered by 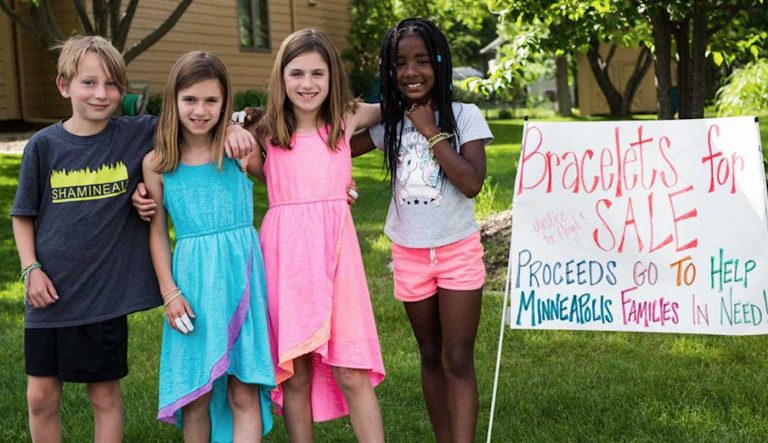 Some unlikely heroes in Minneapolis have raised $100,000 to support black-owned businesses and neighborhoods by selling Homemade Bracelets—and they’re only 9-years-old.


Anne Frank had a sister, Margot Betti Frank, who was 3 years older than her. She also wrote a diary like Anne. Unfortunately her diary was never found.
NOW GET SMARTER WHILE YOU SCROLL.
Powered by

The dark night flows;
With the speedy time,
And all the whispery birds,
Chirp in the world of mine.

And at last,
What I love
Is the beauty
Of the mischievous nature.

Listen to the nature’s cry;
And then you must try,
Then be a nature saver
And be in Earth’s favour.